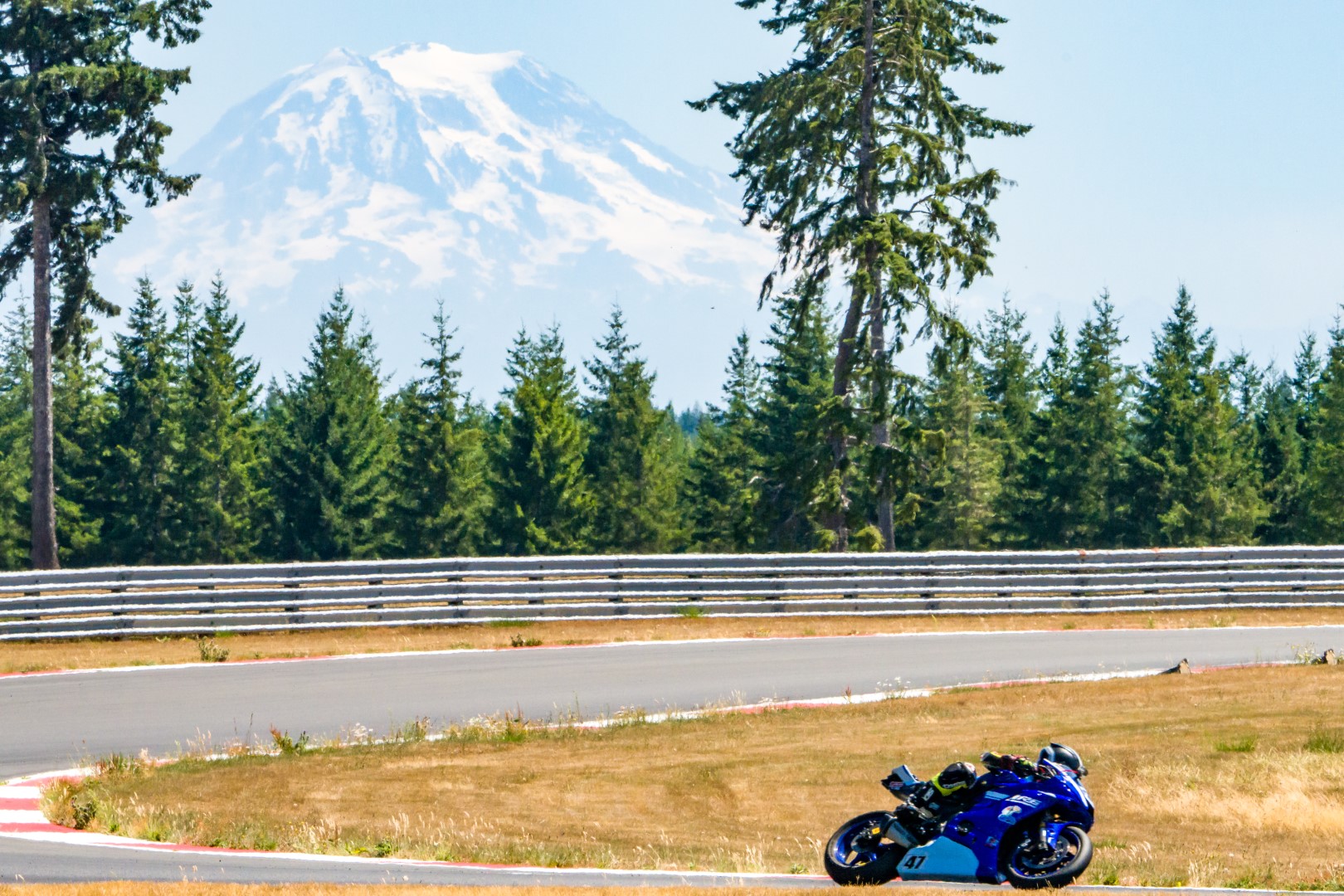 Round 6 was much cooler than Portland and brought a packed house. Seeing 40+ bike grids in the Pacific Northwest was fantastic. It brought competitive racing and me a few personal best laps.

I had elected not to attend the Friday practice day as I was at the track at an event Monday. I felt fresh enough to be able to get going quickly on Saturday morning. It turns out that was true, but I did have a surprise that folks that attended the track day were already very aware of: a new track feature in turn 8.

During the week, a car day had an incident in which a stock car bottomed out through turn 7 and split its oil pan open. It turns out a car has a lot more oil than a motorcycle. I have to applaud the car driver for having a perfect line through that section. From the exit of 7, to the apex of 8a, there is a line of oil that shows you the ideal way around the track. And at the apex of 8a, there is a kiddie pool sized circle of oil.

Luckily WMRRA stepped up here. The folks I talked to that attended the Friday day had a hard time through that corner, tiptoeing around a bit. WMRRA worked to fix this the best they could. The track had alread grease sweep’d the area but based on feedback Friday it had fallen short of the ideal cleanup. WMRRA requested the track be rinsed and The Ridge obliged by dumping a lot of water Friday night. Race direction said this didn’t so much get rid of oil as remove the track’s grease sweep. Saturday morning WMRRA went out and brought their own grease sweep and an army of volunteers to scrub the area. I have to say I felt grip was pretty incredible given the circumstance. It was maybe less grip than usual, it was a bit distracting, I still delayed throttle there, but from what I heard about friday, the result was outstanding. Thanks to WMRRA volunteers here.

For qualifying, given the large grid sizes, traffic was an issue. I didn’t have a single lap that I wasn’t passing another bike on track. The end result was a 7th row position for 600SS and a 5th row start for Formula 600. While this wasn’t an ideal qualifying, I am a solid starter, so I focused forward on the race.

For an added incentive, Paul McComsey and Mark Szilveszter decided to have a small bet. Paul was certain I could beat Mark in all of our race events. Mark was certain Paul was going to lose that bet. You know, no pressure… 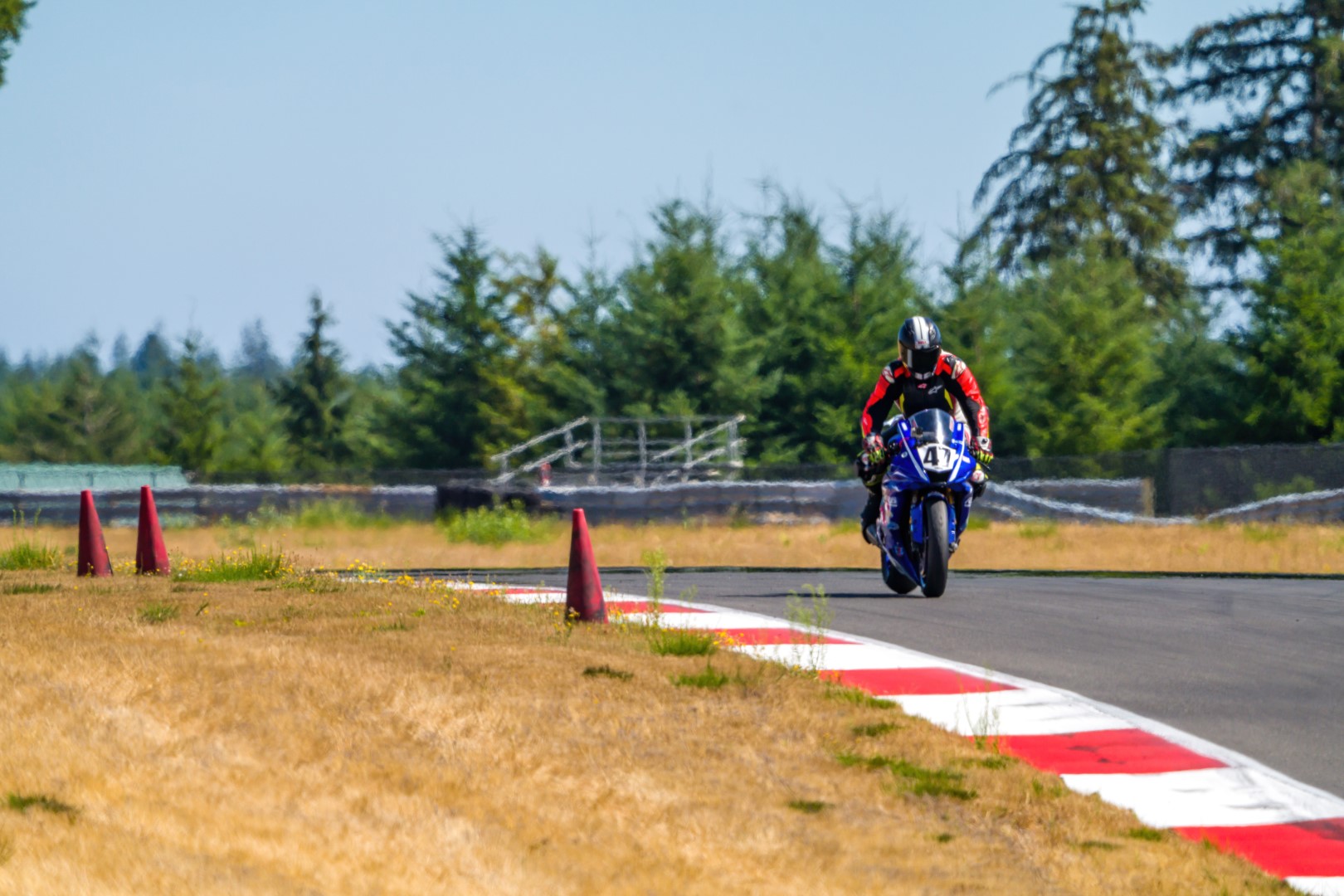 For the 600 supersport event 41 racers entered. Starting in 21st seemed a bit less bad given that context. I am so glad to see big grids in Washington. The last grid I have raced on that was this large was in California. I hope to see many more rounds this size!

I was able to get a good start, making up a couple of rows into turn 1, slotting in to 10th. The first time into turn 7/8 was a little nerve-racking and I lost some time through it. Luckily after the first lap I seemed to figure out the grip level was alright.

On the second lap Visser came around me and added some distance between the two riders in front me. I figured I could get by one if not both of them, so I figured I should be able to go 11th to 9th. What I didn’t expect is I would do that on the same lap. I was able to pass Kent Swenseid into turn 8, and Damon Poor into turn 11. The race ended early due to a red flag as Damon unfortunately crashed into turn 13. I was able to finish in 9th. 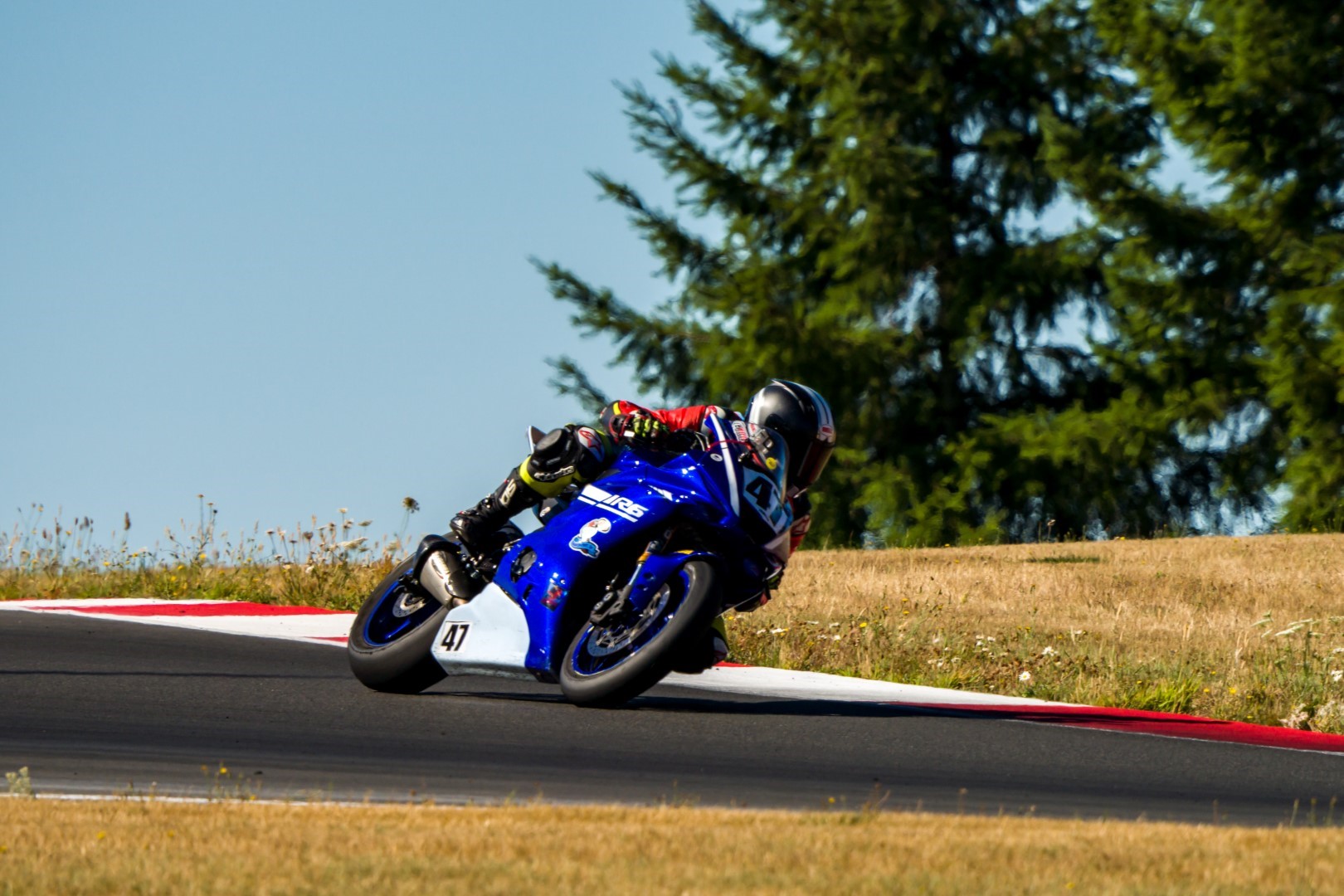 The grid for Formula 600 is often a bit smaller than Supersport so I started in row 5 instead of row 7. Another good start and I was able to slot into 8th place on lap 1. I was focusing on shoring up a few areas I knew I was underperforming in 600SS. I needed to be more comfortable through the grease sweep, I needed to get a better exit out of turn 16 to extend the front straight. While still room for improvement, I did find some of what I was looking for. I also spent this event behind Visser for the entirety of the race. I don’t think by the end there wasn’t a corner I didn’t think I could push for a pass. Our pace really is quite similar. It was a fun race, even if by the end I never wanted to smell race gas again. Good riding Garret. 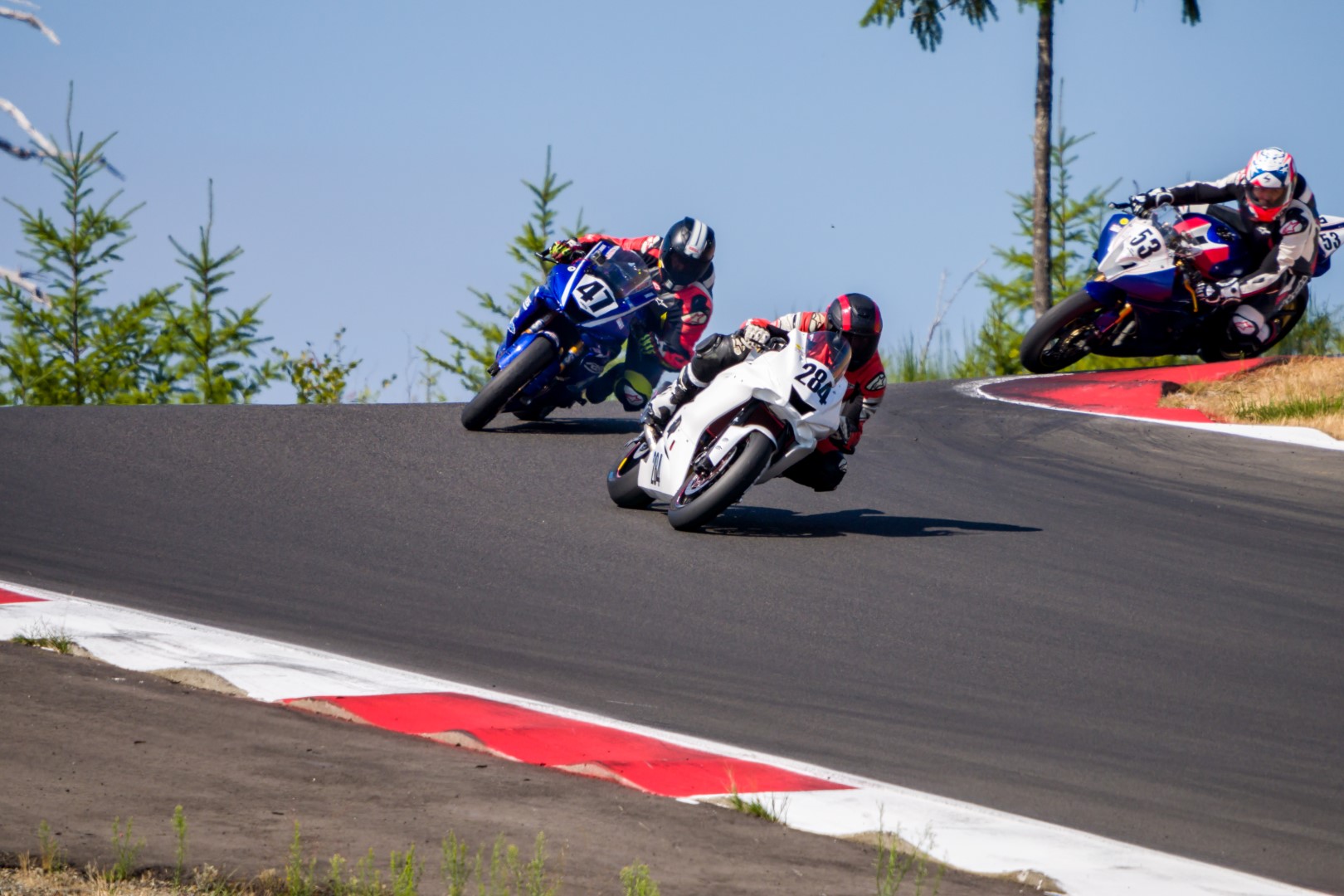 I was looking forward to Sunday qualifying. It means I have a second chance to get a grid spot further up in Formula 600. As I am getting my gear fully on for the session though, I notice my airbag suit had just a red light, which isn’t a thing I have seen before. It turns out it means it is in a failed state and I’d need to plug it in to my computer and diagnose. But I didn’t have time for that. Qualifying is 15 minutes long and it is starting NOW. So, for this time, it seems I am going to be going out with a heavy, and rather expensive, back protector. Well, on a positive notethis did get my adrenaline going. I set two laps that were right about my race pace, thinking about a red light on my forearm almost the entire time, and pulled off as I wanted to limit my risk. Well, turns out that was a fine choice. I qualified 5th for Formula 600. 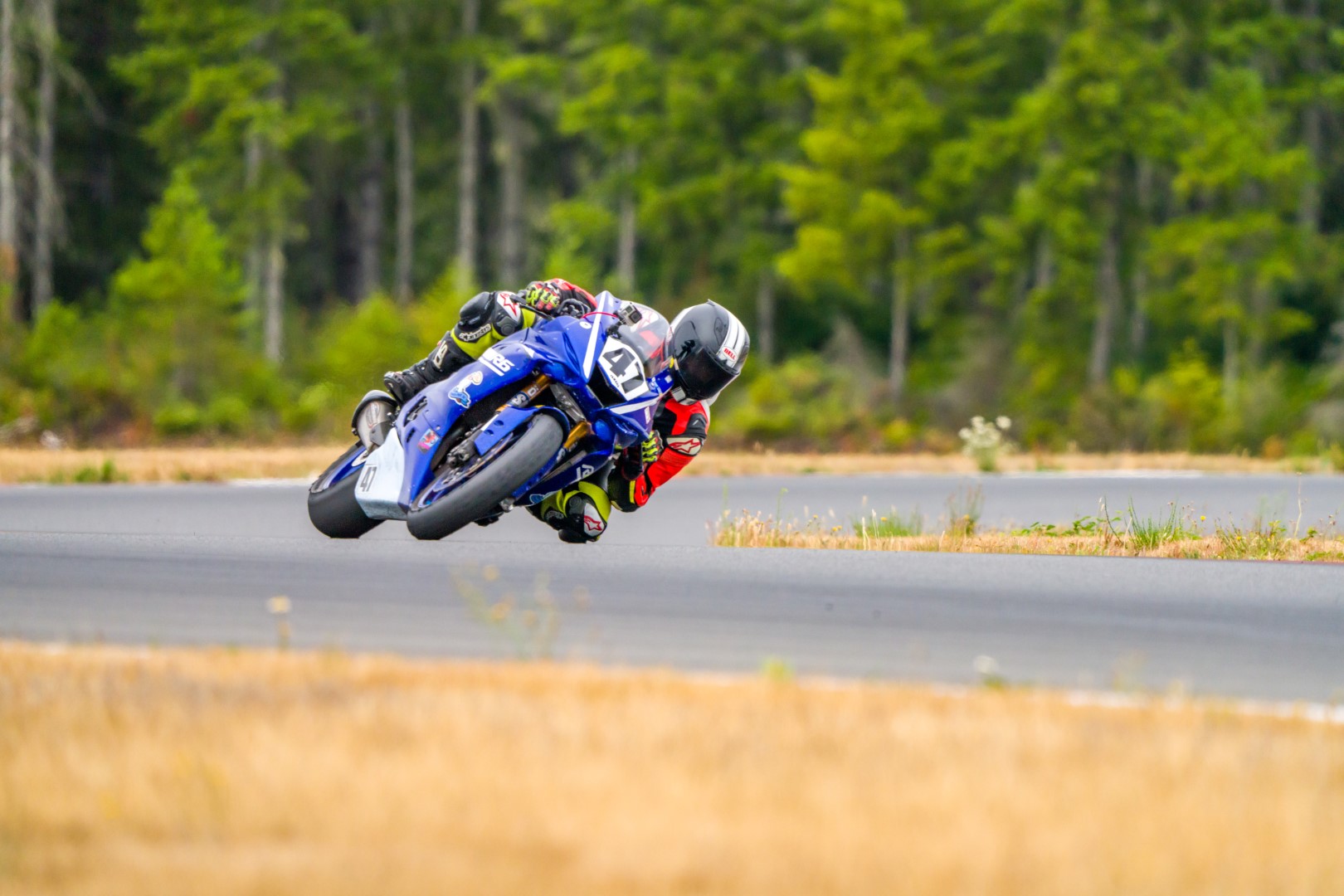 Unlike F600, 600SBK grid is set by Saturday Qualifying and I’d be on row 7, so I was going to need to focus at the start to make early passes. I got a decent start and got to work. I was in 11th place into turn 1, so I had a bit more work than my races Saturday. I made a pass for 10th through turn 7 and into turn 8, made a pass up the hill between t9 and t10, and made a pass into the braking zone of turn 11. It was great to get my head down and make these early passes.

At the end of lap 2/beginning of lap 3, I made a pass into the chicane to get up to turn 7 and was in my best place of the weekend. Unfortunately on lap 4 Micah Kudo made a clean pass into turn 6. I wasn’t far off of him for the rest of the race but his pace was a hair faster than mine. He ran solid times for the rest of the event. I took my second 8th place of the weekend. 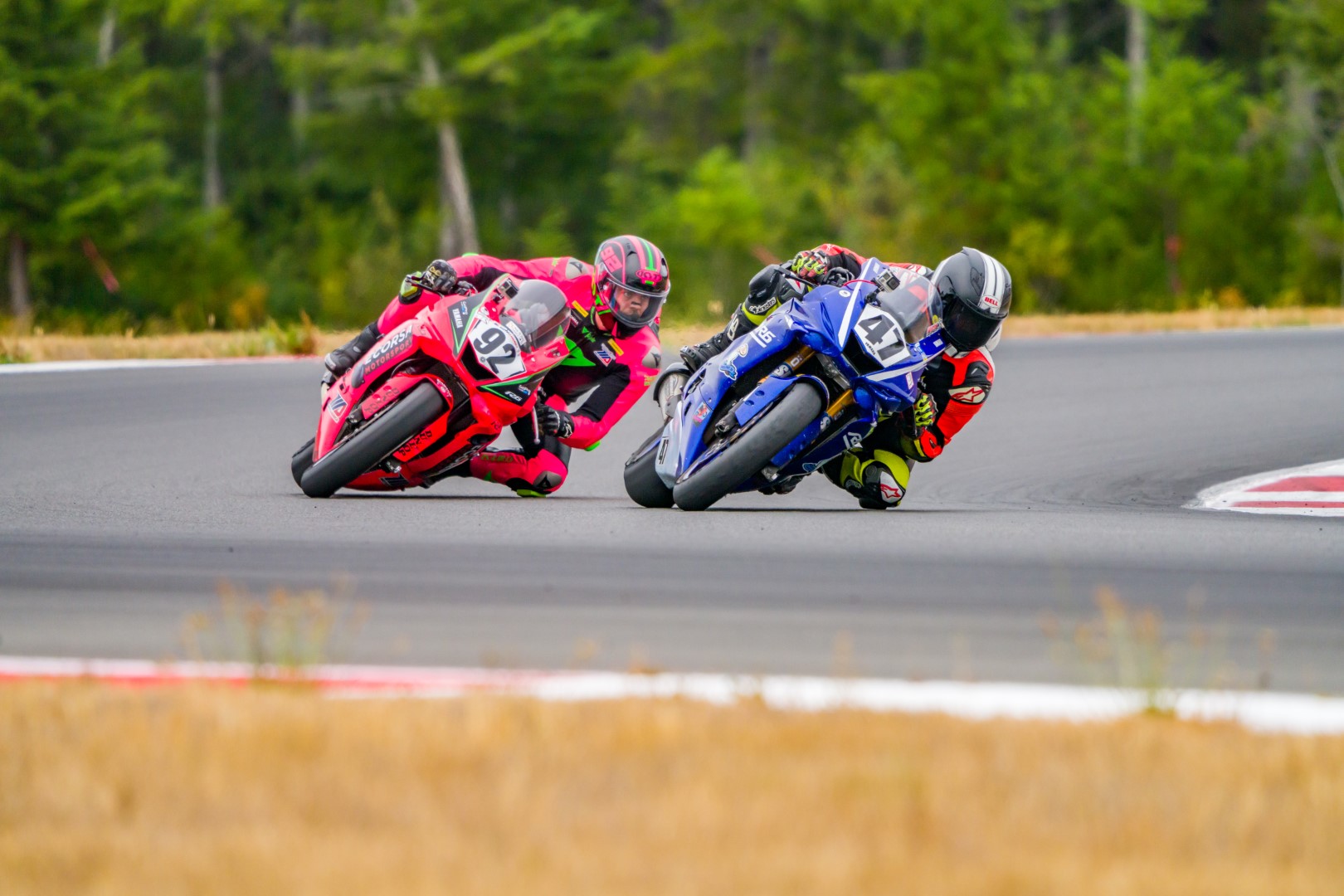 I went to put my tire warmer on after 600 SBK and was surprised to find the right hand side of my tire was GONE. I had no wear indicators, I had burned through all of the compound. I sprinted in my full gear to Sage at CT Racing Services and asked if he could get me a new SC1 rear mounted immediately. He was set to go and 2 minutes later I was back with my rear thanking him in advance. Lucky us, we didn’t have to add any weights to balance which meant I was back, in my pits, with a mounted wheel, with enough time to heat soak the tire for Formula 600.

Hoping to capitalize on my qualifying I was ready to go for this start. The lights went out and I was looking to to stare down the top riders, coming into turn 1 in 4th place. I could see they had pace on me, but I figured maybe, just maybe I could latch on. Unfortunately by the time we hit turn 9, a red flag was thrown, and this event would be restarted.

Now at the end of the day, and 6 laps, I still have 5th position, and do my best to get ready to go. This time I am P5 into turn 1, though I feel like I am a bit closer to the pack. On lap 3, Visser made a pass into turn 12 and I spent the rest of the race just harrassing him. There wasn’t a great opportunity for me to pass, but I never left his back wheel. On the last lap, Garret got a bit out of shape through turn 16 and I had a chance and tried to capitalize. Unfortunatly I was 0.100 seconds shy of getting him at the line. I was hoping in a race to make Garret stare at the back of my helmet but I guess it will have to wait for next time.

For those that are wondering, yes, I won Paul $20. I also noticed when I got home I felt a bit off. It turns out I had a 102F fever. And sure enough, I had caught COVID and was racing all weekend not quite realizing it. To my knowledge, none of my teammates got it (we do a pretty good job of being precautious and we are outdoors spreadout). Adrenaline is an increible thing. I’ve heard about pro riders doing extraordinary things after food poisoning, broken bones; I think I now understand first-hand. I set personal best laps, and fought hard, all while ill. And had I not taken my temperature when I got home I likely never would have known.

Thanks to the fellow Short Fuse Racing members that were in the pits. You are always supportive and helpful. Special thanks to Dave and Colin who, after my 5th in F600, dumped a water jug on me before I could even get off my bike. Y’all are just super.

Thanks to my wife who lets me do this expensive time consuming hobby. Without the support at home most racers wouldn’t be out here racing at all. It’s important we recognize the folks helping us do this crazy thing.

Thanks to Track Time, Alan Schwen, Ken Hill, and all of the other staff members. I say it all the time but my riding is where it is thanks to the entire team.

Thanks to Sage at Pirelli/CTRacing for sticky tires, always being quick to help me get things swapped around for races. Having a fresh tire for formula 600 was a huge confidence boost. The other tire was way over used and would have been in my head if I tried to ride on it.

Lastly, thanks to Louis Stevenson for taking the amazing photos you see and bringing ice cream.