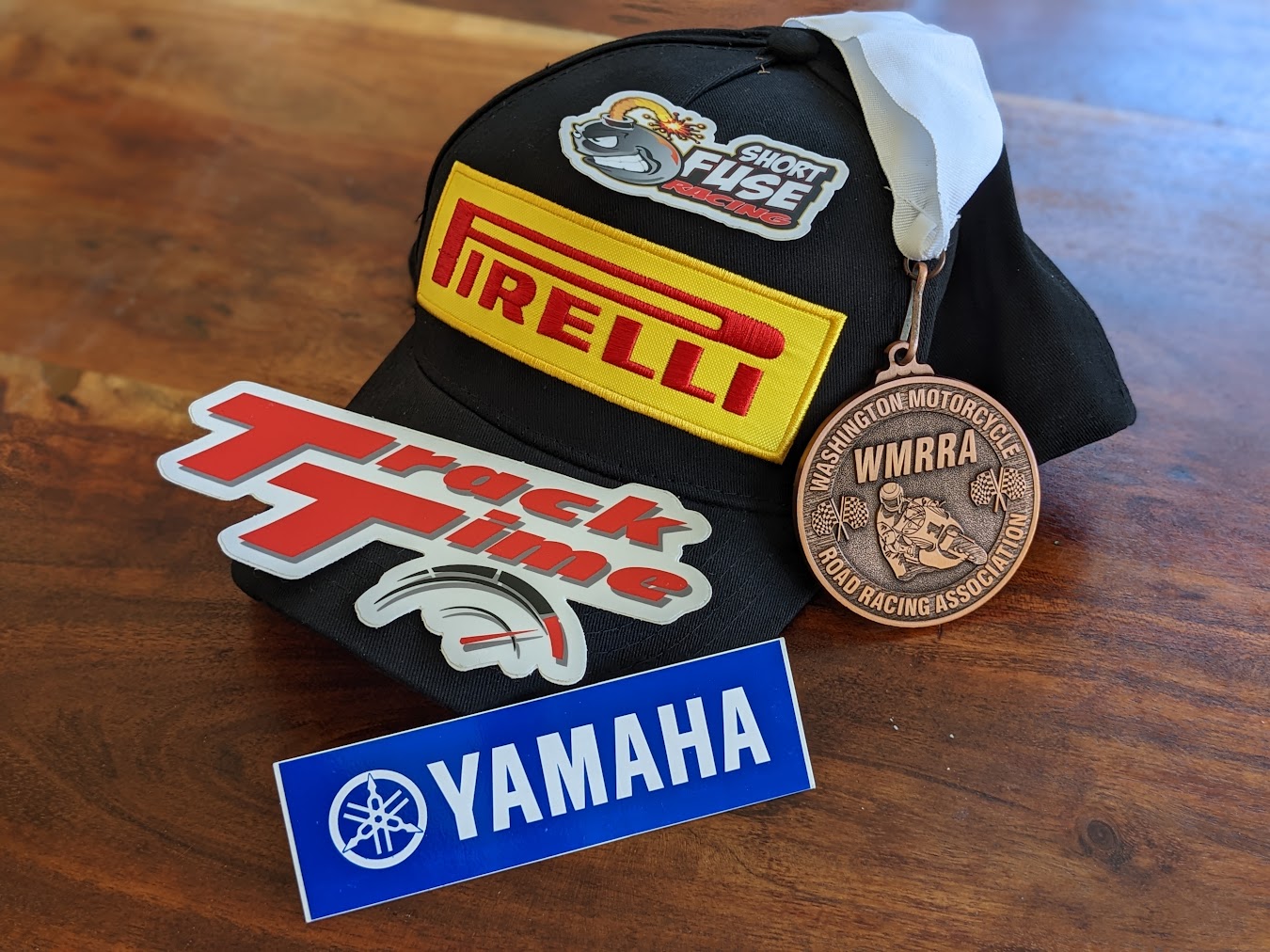 Every race this weekend had something special about it, hard battles, a bit of bar rubbing with another rider, a mechanical, and my first 600 SBK podium!

I wasn’t able to attend the track day, and the universe aligned. WMRRA managed to secure additional track time and used it to lenghten practice and qualifying. I took full advantage of this and put some laps in Saturday morning. I also have been working to go straight to ‘race’ mode when qualifying comes. This has been a struggle for me since it isn’t a ‘race’ at all. Well, it seems I managed to get closer this weekend, qualifying 6-8th for all of my races this weekend. 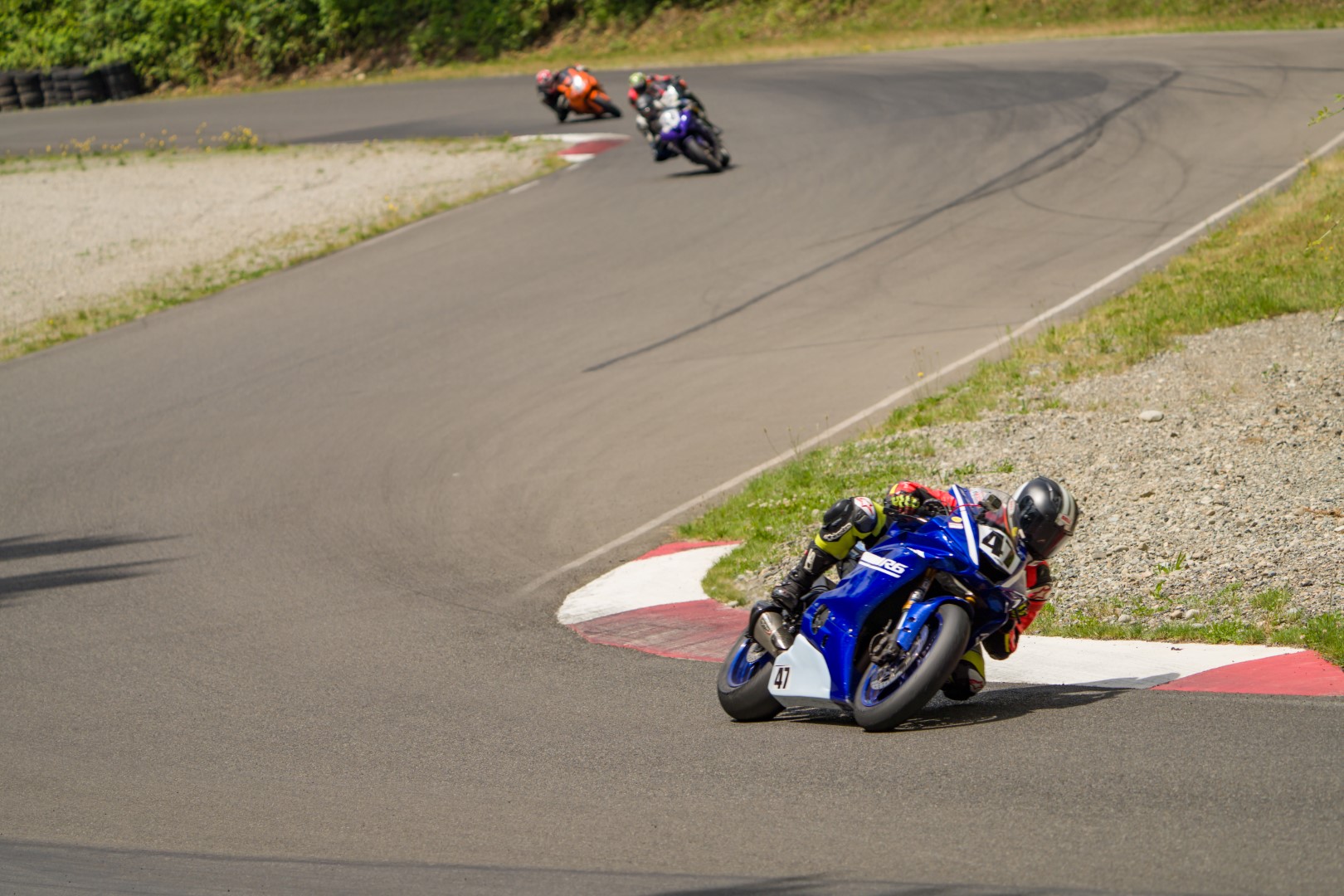 600 Supersport was the first race of the weekend. Elijah, our race starter, was on a mission to catch some of us out with some quick lights at the start. I hadn’t even finished my launch procedure when out-goes-the-light. I still had an alright start but, I have to say, Elijah you kind of got me.

From there my race was pretty fun. Right off the start I was on the backside of Gavin Soderholm. He didn’t get a great drive out of 2 so I thought I’d try up the inside of 3. Well, Gavin either didn’t like that idea or had no idea I was there, because he came hard from the left side of the track to the right and I had to ride a stoppie down the hill. The race got a bit less punchy but was still interesting. Damon Poor and Tim Wartchow were hounding me all race long. I found out after the race they had a gentlemen’s wager between the two of them and were having their own little battle back behind me as well. On the last lap Tim passed me into 3, hoping to use me as a buffer. Damon didn’t agree with this concept though, following him right on through more or less. I worked to get good drive out of the bus stop so I could pass Damon back. It ended up being a very close finish with me in front of damon by two-hundredths (.020) of a second. Tim, looks like you won the bet.

Formula 600 continued the fun. I was able to get a decent start and had a spaced out race for the first 3 laps. Going into the bus stop on Lap 4 Logan Oster tried to get around me on the outside of the bus stop. We ended up touching arms through entry and both sat up a bit, spaced out and continued on. It was a solid attempt at a close pass. He tried again down the hill and got by. I was able to mostly match his pace, but wasn’t quite as hungry for the place as he was I dont’ think :) Good racing Logan! 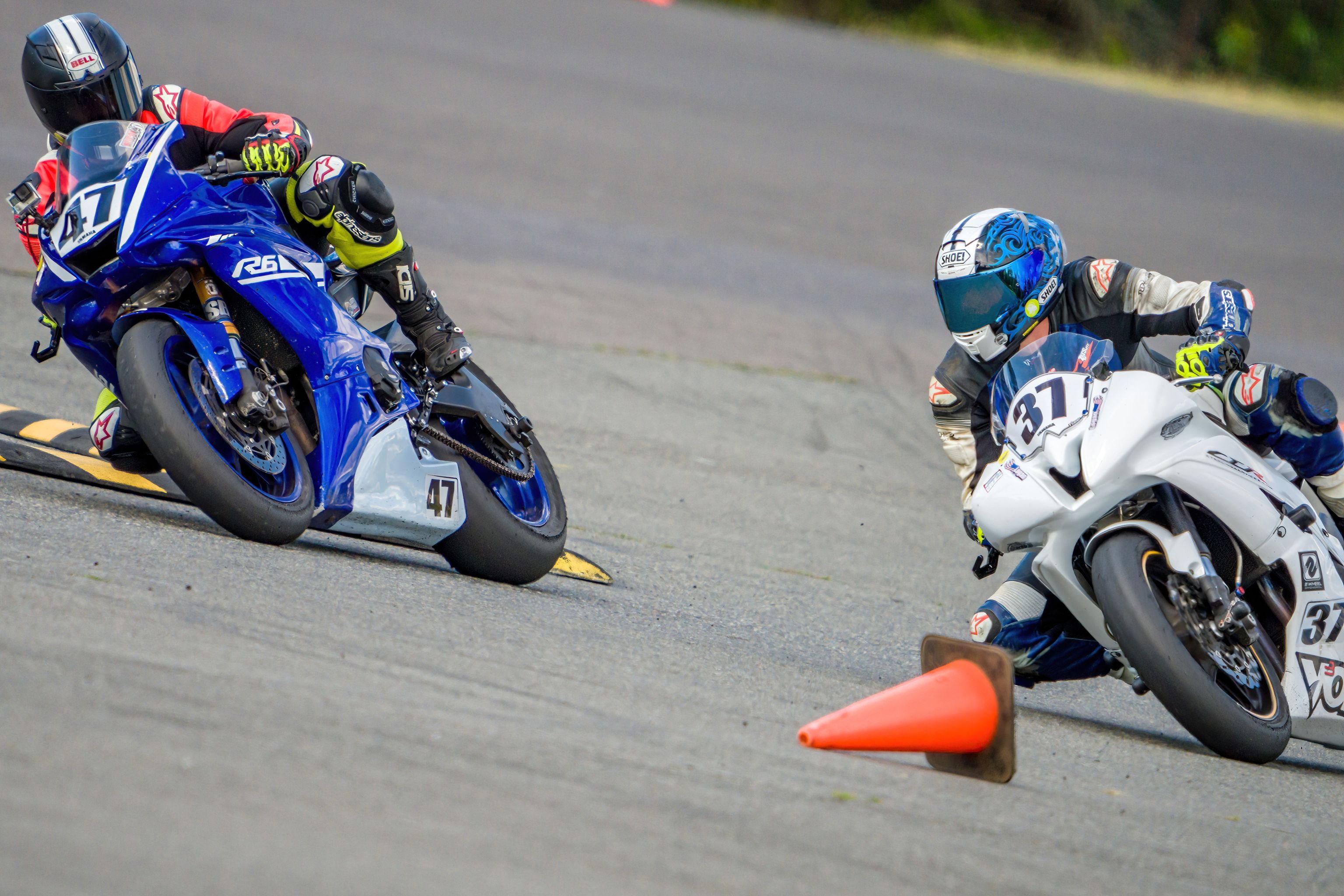 I got up Sunday morning hoping to repeat my qualifying performance from Saturday. I managed to set laps about in line with my race pace, a 1:31.484, which is amazing for me. This secured me a 6th place grid position for the race. Second row start, on a good line. I’ll take it.

I got a great start in 600 Superbike and was slotted into 4th. Garret Visser and Micah Kudo were in a close fight in front of me and I was doing all I could to hang on. Unfortunately Micah went down in the bus stop, but then I realized I was now in 3rd. I did everything I could to run consistent laps and not give up this place. I had an opportunity and I didn’t want it to slip through my fingers. I was also glad Logan, the same Logan who had been racing me hard Saturday, was on the wall signaling the gap I had behind. Every time I would exit turn 4, I could see bikes entering and new I didn’t have a giant gap. All race I seemed to be maintaining a good spacing, but on the final lap he moved his hands a bit closer together signaling that the riders behind were picking it up a bit, trying to close the gap. I put my head down to try and see if I couldn’t find a bit more pace. Well, I pulled that off. I ran a 1:30.256 which smashed my personal best. As soon as I crossed the line, I screamed enough to darn near lose my voice. I had managed to get on the box in an Expert 600, superbike no less, race. I’ve had other podiums, but never in one of the premier 600 classes. 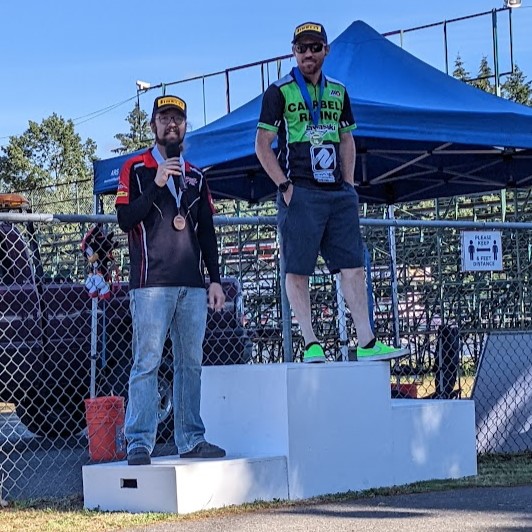 My last race of the weekend was Formula 600. I was excited to get out there and hoping to carry some of the new found speed from 600 SBK into this race. I was riding in 5th position for the first 2 laps, and could see the rider in front, could see the ability to close. Unfortunately as I exited the bus stop, my bike suddenly rev’d to the moon and wouldn’t leave second gear. Hmmm. I looked down, and my shift lever was dangling. Welp, that’s not going to work. I through my hand up swiftly, got to the side of the circuit, and waited for the pack to come by. I exited the track deflated and a bit annoyed. This is a pretty common failure that everyone seems to have once at least. It was my fault as I had changed a shift rod this weekend to adjust the angle of the lever and I must have failed to properly secure that specific bolt. As soon as I got home, I retorqued every bolt on my controls. 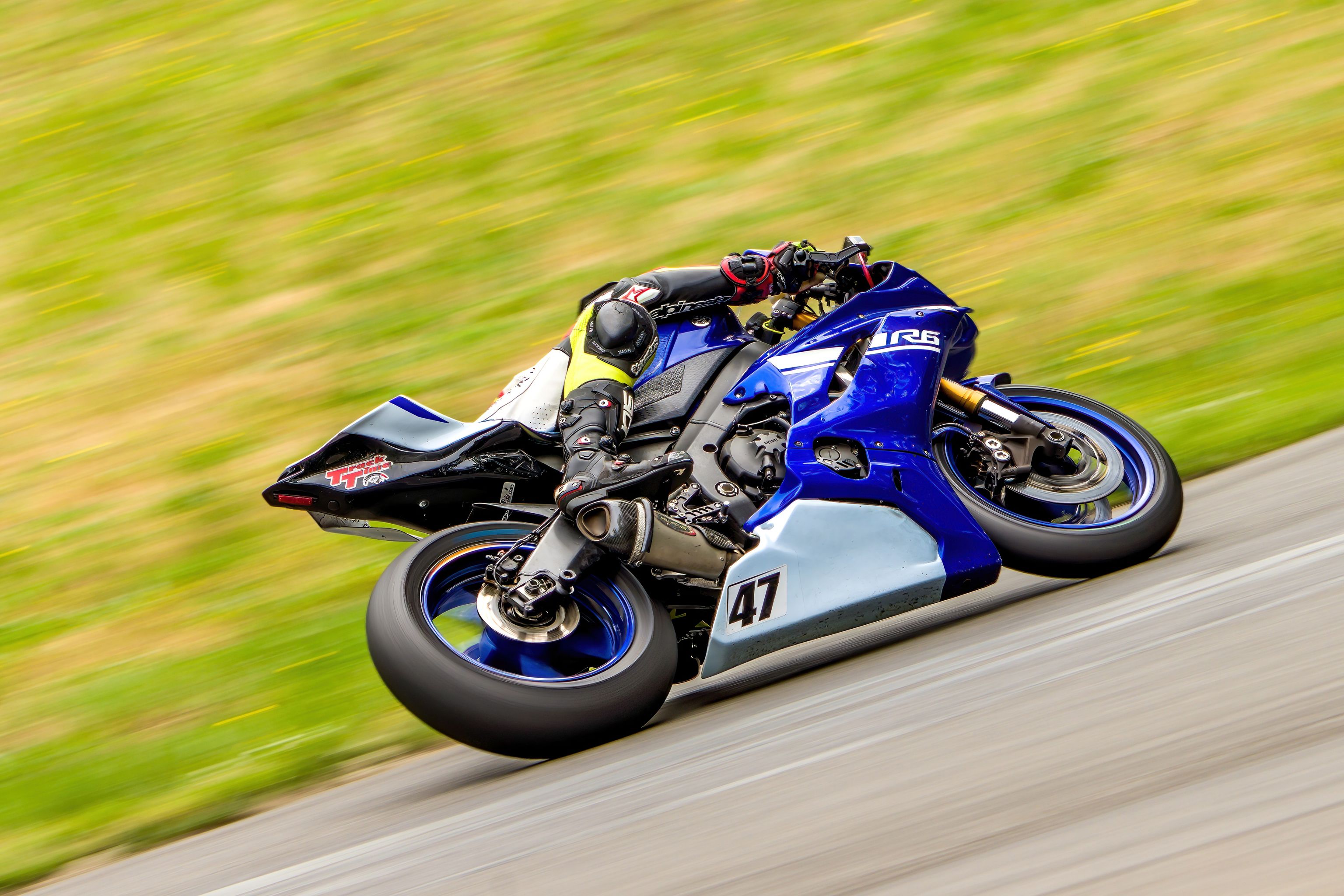 I have to thank Short Fuse Racing for all of their support every race round. Our little team is a bit light right now with two riders out injured, but some of them even came out to support anyway. It’s hard to fully explain just how helpful it is to have folks in the pits that can help go awry. Also special shout out to my teammate Dave Pearce who built the shiny new podiums I got to stand on this weekend.

Thanks to Track Time, Alan Schwen, Ken Hill, and all of the other staff members. I’ve been working with y’all for a while as we all improve our craft. It is unbelievable how far we have come. Track Time staff had 14 podiums this weekend. 14. So cool.

Thanks to Sage at Pirelli/CTRacing for sticky tires, always being quick to help me get things swapped around for races, and just being a friendly face in the paddock

Thanks to Nate Phipps and 2WDW (2Wheel Dynoworks) for working on the bike this offseason. Power delivery is prettydarn smooth and the bike pulls great. I was dicing with some folks that I know are running trick fuels and on pump gas I am hanging right in there.

Last but certainly not least thank you to my wife Anna Piechowski. This sport takes so much of my time, of our money, but she supports me anyway. She wasn’t trackside for the weekend, but had live timing up from home and knew the moment I finished 600 SBK I had pulled off a podium. She also hopped in the car to get out to the track to celebrate with me and Short Fuse.

Can’t wait to get back on track and continue to grow. See y’all in Portland. 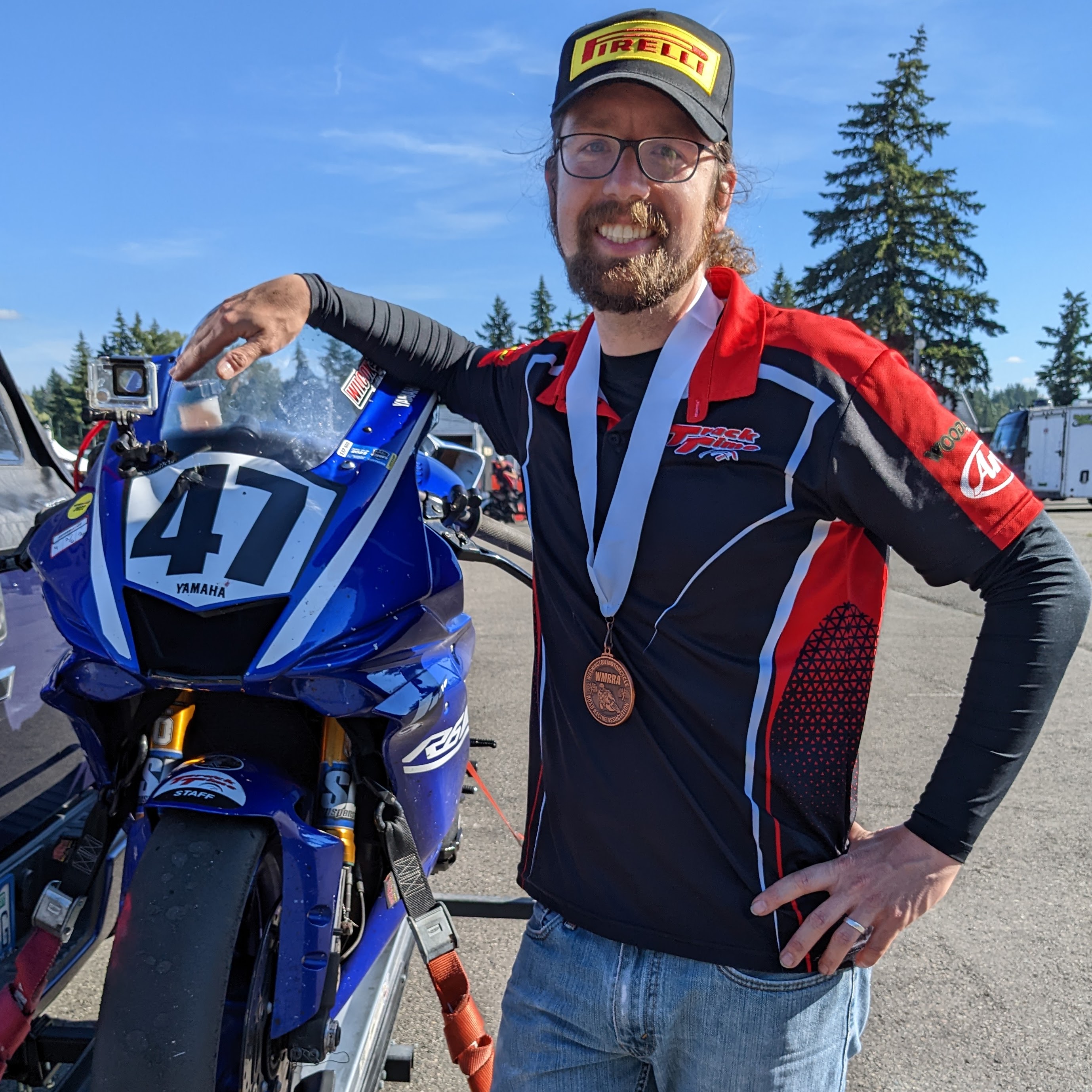