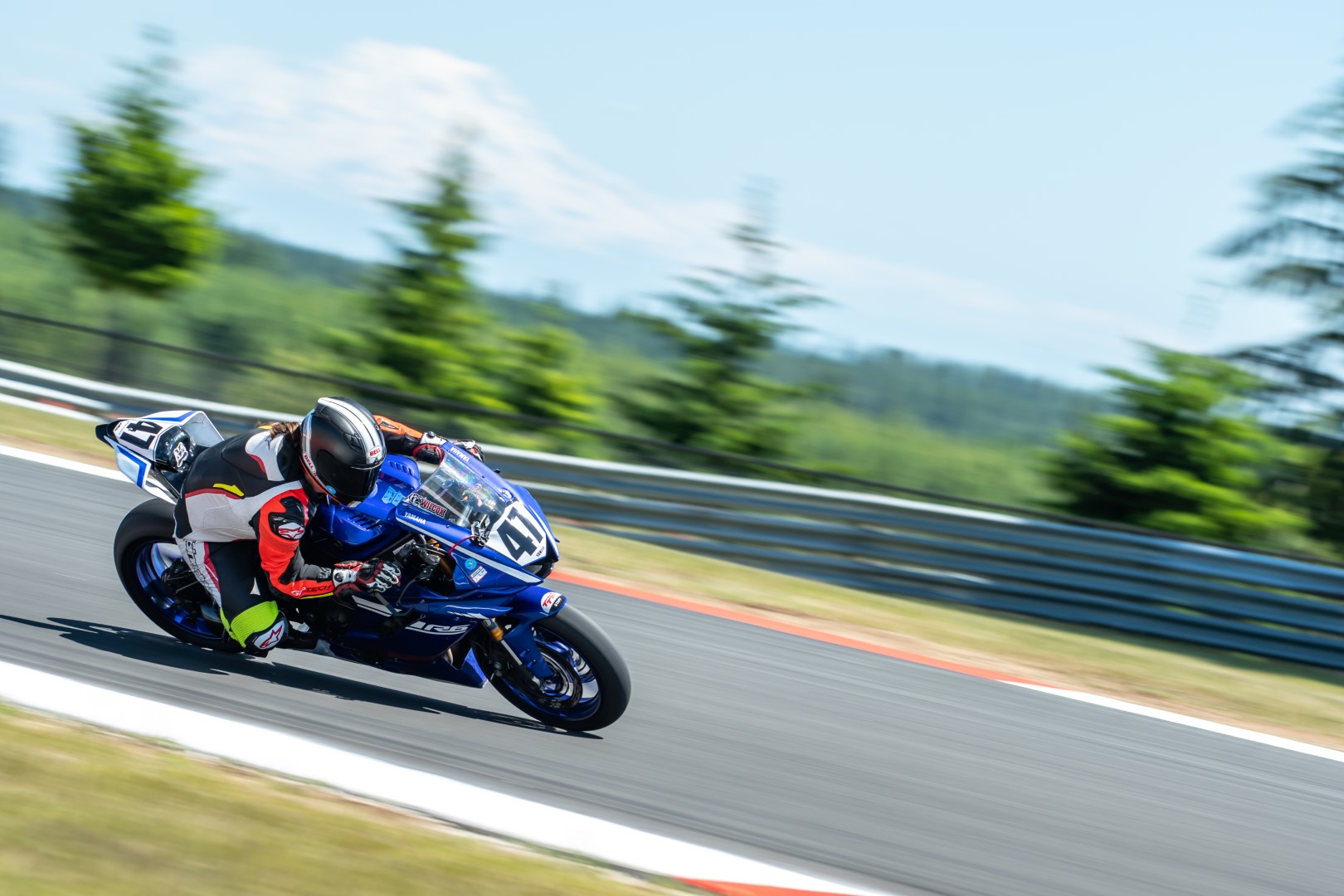 This weekend brought high temperatures, my first ever F2 race, and some personal best lap times.

This weekend there were 27 bikes on track for 600 qualifying. This is the most bikes I have had to compete for track space with for a qualifying session. Paul McComsey, Miles McElhany and I all went out together. The thought was, since I didn’t do the track day, I’d get a reference from Paul. We didn’t plan to go out with Miles, but I figured I could use him just as well as Paul. It was clear we were in traffic, so we all pulled off on a lap to try and find empty track. Unfortunately we slotted right back in to more traffic. As it turns out Miles was a great reference. I was able to fall back a bit, and then on my fast lap close the space to qualify best of all three of us. It was still a high teens grid spot, but it was workable.

The temperatures weren’t awful at this point of the day but it was warm for sure. I got an alright start, but I didn’t bring my aggresssion. While my start off of the line was good, I gave up a couple of places through T1 and T2. This is definitely an area for me to improve. After lap 1 I was able to slot in to a pace pretty alright. I would battle through some riders and I feel good about the race. To my surprise, when I arrived in the pits and looked at my data, I saw a 1:54 lap. This is far and away the fastest race lap I have run.

The lights for both Saturday races were super fast. Despite this I got a pretty good jump. I still did a poor job on T1 and T2 off the start, but I didn’t back off and give up as much ground through T3 and T4. While I didn’t have many passes in this race, I didn’t really lose the pack through the race. I was a bit more consistent with my times, mostly in the 55s, but did have a few higher laptimes. Along with starts, finding a way to get a bit more consistent will pay dividends.

From the start of the day Sunday it started to shape up to be a harder day than Saturday. In the morning practice there was an incident that required ambulances to be deployed on track. Unfortunately Sam Crawford went down in the morning practice and was unconscious. The medical professionals and track staff were amazing and super fast. While they were able to revive Sam trackside, he didn’t make it to Mason General. Details on exactly what occrued are sparse, but Sam will be missed. I have known him since I started racing and he truly was a kind and positive human being. He will be missed in the paddock for sure.

After feeling like Satuday was hot, Sunday was an oven. By F2 race time I had already consumed more than 1G of water and was using cooling towels. I got a much better start, really reflecting on how Saturday went. Unfortunately it wasn’t good enough to keep Mallory Dobbs and her extra pony Kawasaki 636 behind me. Even on her old bike Mallory was a hard to pass rider, but now it is next level. I tried everything I had but she came out on top. There was a potential move on the last lap but there was an incident in T13 with Sergio Gingerich and Joel Ohman that meant I couldn’t go for the pass there. It was still super fun racing and I found a lot of places I have never tried to pass before to give a go. Next time Mallory.

The heat got to folks and this race was a bit lighter on entries. I got an awesome start and was 3rd place into T1. I tried to stick with Ryan Doherty and Micah Kudo but they were on. I ended up giving up two places over the race to end 5th. Not a bad finish but I really think a few small changes and I could have been 3rd or 4th.

Thanks to my wife Anna Piechowski for sitting in the paddock all weekend baking on the asphalt with Short Fuse Racing. Thank you to Kumpy Racing Services for getting me a new front Dunlop tire despite short supply. My old one was pretty up there in laps and it brought a lot of confidence. Thank you to Ken Hill and Track Time for allowing me to marshal for the organization and the tips that continue to make me a better rider. Thank you to all of the Short Fuse Racing riders for being a great bunch to spend a weekend with. And thanks to the WMRRA staff for doing all they can to host a safe and fun filled race round. 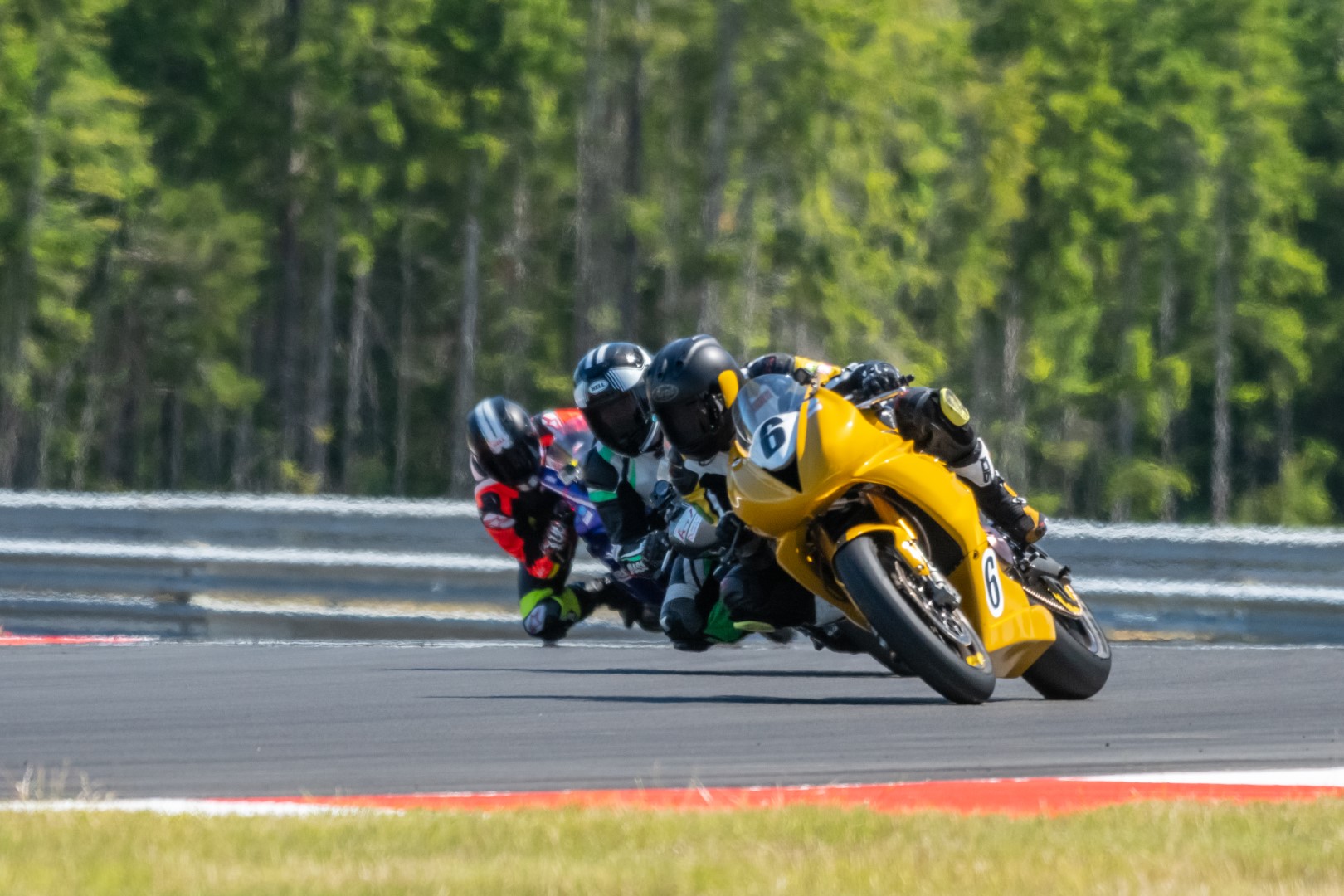