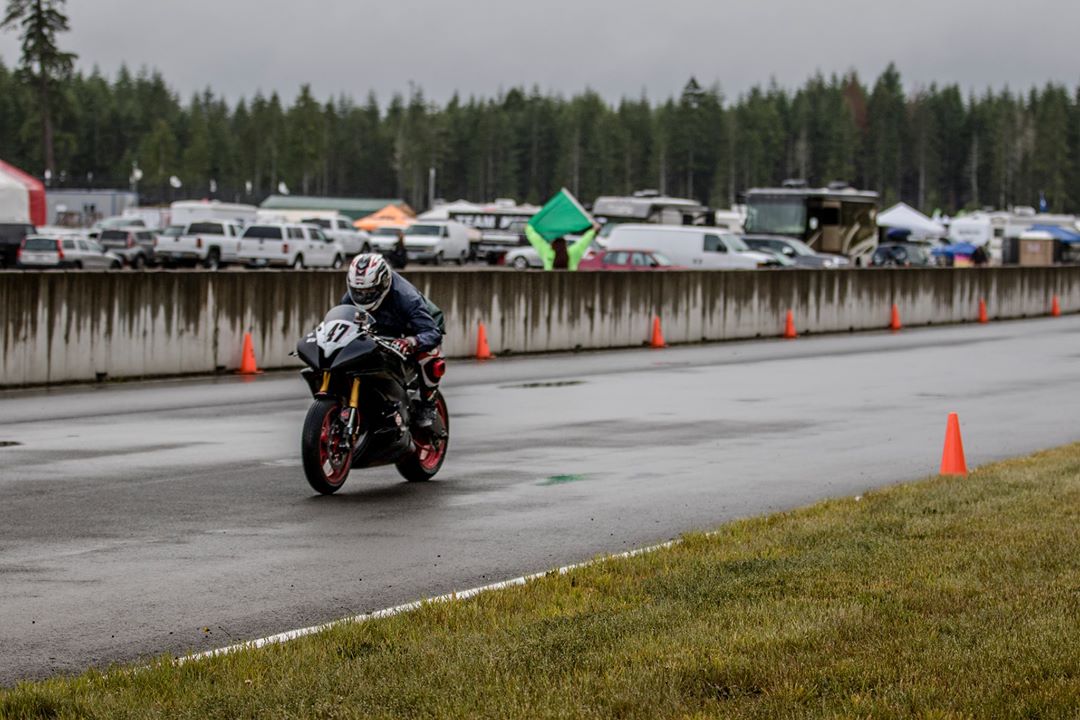 This weekend contained a few new experiences for me. It forced me to work on mental focus, and to deal with a few wrenches. Saturday’s forecast called for a 20-30% chance of rain. I noticed it raining while I was still sleeping, but figured it may clear up. It isn’t unusual for it to rain in the early morning in Shelton. As time went on, though, it was apparent the rain was not going anywhere. So, Ihor and I both started to do wet setup. I helped him get his ready so he could go out to practice first, then moved on to mine.

As I got my wet setup together, I hear “Rider down, rider is not moving,” followed shortly by the call to red flag the session. I waited to hear who crashed, but all I had to do is turn around. Ihor had crashed coming out of 16 onto the front straight. It isn’t a slow place to crash, and it tends to produce rather spectacular high-sides. It was quite nerve wracking, since it took them a bit to get Ihor up and he was very still as the EMT’s strapped him to the board and put him in a neck brace. It turned out that Ihor is very good at following instructions; he didn’t move a muscle as he was put in the box. We did have a brief talk that you can give a thumbs-up if you want. :)

Even though crashes like Ihor’s suck, they always shows me how caring all of the members of my racing family are. When one of us gets hurt, everyone comes together to make sure it is handled as well as possible. Everyone made sure I was alright and had the information I needed to help Ihor. I spent the rest of the morning in the hospital with Ihor, who was shockingly alright. He got a concussion, bit his tongue, and his face was dirty but otherwise, just normal Ihor, chatting away while restrained in a neck brace in a hospital bed.

When Ihor was cleared, we headed back to the track a little after lunch. My head was not really in the game to run 750SS, so I skipped it and prepared to run 600SS. Once the fog of my morning’s adventure cleared, I realized I have very little time on the bike in the wet and none at race pace. And I missed all my practice! Yikes. I decided the best thing to do was take it easy; didn’t want to do anything to bring more excitement to my day.

I did my best to go fast in the wet. I got a good start but, man, that mist into turn 1 is intimidating. I got passed by a few people into 1 as I backed off so I could see. I guess that is part of not doing this before; the new experiences can be a bit overwhelming. But in the end I think it was a successful first race. I didn’t crash and I had fun. I am sure there will be more rain riding in my future but the first race in the rain is history!

This brought a bit of confidence going into Clubman. My start was not as good as it was in 600SS, but I was able to find a bit of a space for myself and rode around the track without much drama. My rain riding has a lot of room to improve, but I was happy to make it through the day more or less unscathed. I think I might try to get a wet track day in just to gain a bit of confidence. But let’s just put those rain races in the books and move onto Sunday.

Sunday was a gorgeous day. Sunny, not too much wind, and the track is drying. I skipped my morning practice as the track looked patchy and I didn’t want to do something silly on a damp patch of pavement.

My first race of Sunday was 600 TFS. I got a reasonably good start and was 10th into turn 1. I would lose two more places in the race, but I wouldn’t lose a third. Scott Teuton (#25) and I battled for it for most of the race. He was good on the brakes into turn 1 and I wasn’t, but I kept making it up on the backside of the track. In the end, he ran off the track trying to make a (rather bold) pass up the inside at 13 on the final lap. Here is to hoping for more fun battles like that one! There was an odd moment during the race where my bike sort of “blipped” on the front straight, but Rich Kim helped me shake it off and not overthink it. I mean, it only happened once, right?

Next up was 600 SBK. I went into this race feeling good after TFS, but I pretty much got swamped on the start. I dropped a few places and ended up right behind Keith Blumhagen. I was convinced I could get back in front and started to bring my pace up. But then, in turn 6, my bike just lost all power. I get my hand up as fast as I can, get off the track, and look at my bike. Nothing leaking, but the gauges are off. What the heck is wrong? Well, I had some time to kill so I look over the bike. Sure enough, there is a short in the on/off switch. Darnit. Crash gave me a lift (Thanks Crash!) and I went to work on the bike. I tried to find which wire had the short but I eventually gave up. I cut a length out of all of them around where it seems the short is, pigtail and electrical tape the wires, and call it good. Not the best of fixes, but I figured it would do for the day.

My mechanical forced me to skip 750 SBK, but made it out for Clubman Qualifier. The good news is the bike never turned off on me, but the bad news was it had gotten inside my head. I was afraid my band-aid fix was going to fail and I rode really cautious. If anyone is curious, constantly wondering “Is the bike going to randomly stop” adds about 8 seconds to your laps. I didn’t finish last but this was my worst finish yet. Though I suppose 22nd is better than DNF.

Overall, this was a bizarre weekend for me. It was a definite mental game. Special shout out to Allister MacKinnon and Rich Kim for making sure Ihor Leshko and I were never hungry, never thirsty, and never left with a question unanswered. Each weekend I race I am reminded of how amazing my racing family is. You guys are great and I can’t wait to get back out there! But before then I am definitely installing a new switch. Didn’t really enjoy watching everyone else play out there while I stood with my bike parked in the grass. :) 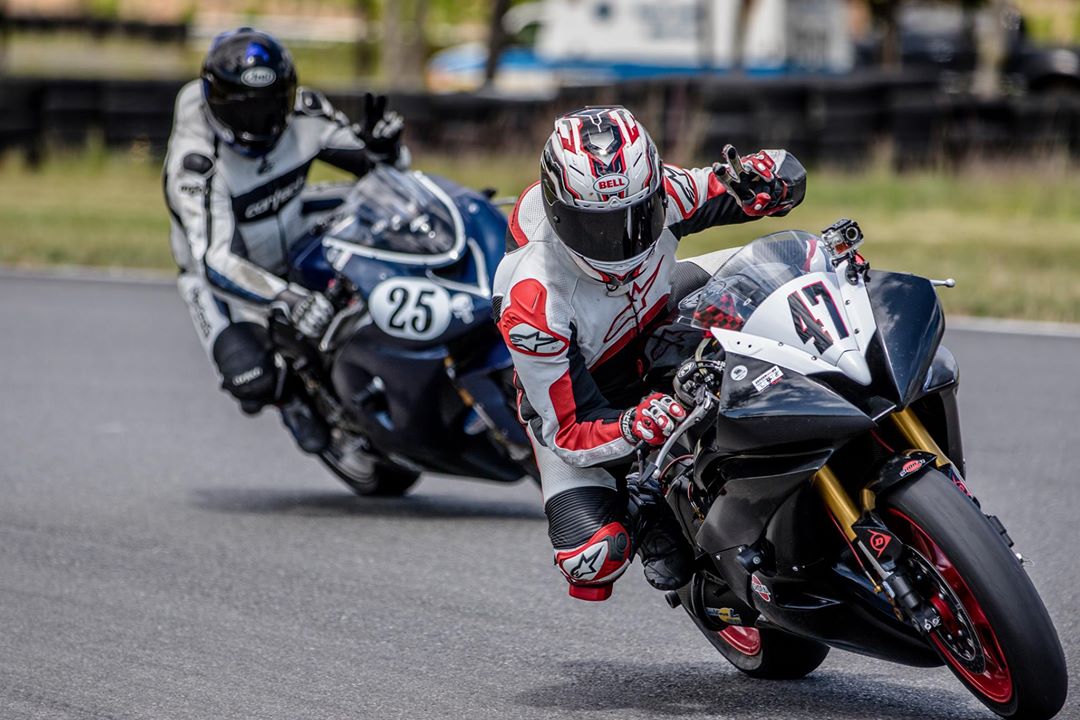 Also, I want to thank Dunlop for making some great tires, Shorai Inc. for providing me an awesome battery that weighs next to nothing, Dane Añar for the great photos, and my wife Anna for letting me do what I am passionate about.